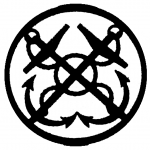 The app is now available! Please download and install for Android phones and tablets.

During the recent dash to pretotype the Anchorholds app for Creeknet, we have been chopping up html and processing images to retrofit our fork of Open University project Salsa.

This requires rewriting of the templates to build the first 16 sets of pages with matching images etc. I can’t say it’s been easy collaborative process, even with great services at hand from Sandstorm and Google, 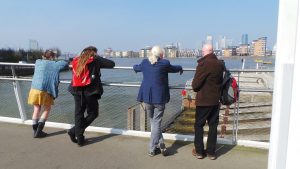 so thanks to all concerned for their tireless support and patience.

Overall we were getting on fine with Sandstorm until some gremlins in the Davros share, made the files read only! With time lapping at our heels we made a swtich to Google Drive to complete the task but got into a synchronisation battle with one another. In the end we have resolved to build a staging server from where future versions of the app html will be tested. This could all have been handled better, so lessons learned! 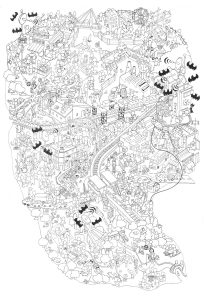 During the last 12 months SPC has been working with individuals and groups based along Deptford Creek who are invested in local, social and technological networks. Some are resolutely off grid, harvesting energy and resisting normalisation pressures. Others take their time to make changes and take on new ideas but almost all have an investment in networks of one sort or another that they strive to build, maintain and protect.

This fantastic pictogram map of Creeknet was drawn by the Minesweeper Collective interns, working out of Deckspace media lab over the summer. It’s their impression of the people and spaces of the area as they have experienced them, where did all those bats come from ?

As a whole it has been a very interesting, complex and sometimes confusing process of exchange that we have been careful to nurture rather than project into, with insensitive and inappropriate energy. Rather we have attempted a participatory engagement in local activities, supporting initiatives and sharing trust, listening to needs of those we meet and working to understand the changing conditions.

It’s also been an opportunity to revisit some of the great relationships established in earlier network projects the most recent of which OWN had fallen out of use in recent years. New mesh network equipment has been installed along the length of the Creek in support of the Mazizones some have already begun cutomising to meet their specific network needs. 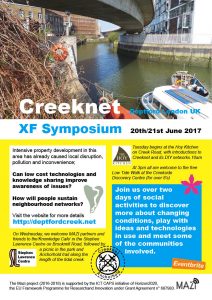 The current version of the resulting Anchorholds app will be available for download in time for the first day of Creeknet Symposium 20th June. For now it works only with Android smartphones and tablets. Once installed and running it will push location specific information to your screen when in proximity to a trail of Bluetooth beacon responders along Deptford Creek.

Today there is just sprinkling of information preloaded in the app but it is intended as one mechanism to promote public awareness of DIY networks of Deptford Creek. We hope to extend it’s scope to list local resources and report on collected data that may be critical to future well being of all those who live and work in the area, cross it’s bridges and moor on its shores.

This entry was posted in Mazi, Report and tagged mazi. Bookmark the permalink.