Panayotis Antoniadis co-founder of Nethood has gathered a group of thinkers and network activists around the MAZI project. As part of this initiative, SPC have proposed to revisit the Creekside network in Deptford and help compose a Mazi toolkit. With this, we hope to further the operation of local offline network services over the free information infrastructures such as the long lived OWN. Here he is talking at a recent floss4p2p event in London. 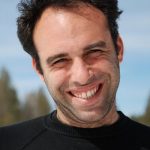 “What I had in mind is that the research would focus on an area covered by a local network either permanently or at least during the duration of the project. This network would host locally crafted educational material and floss applications that would showcase emerging tools and technologies. This could be as simple as a single web hosting device offering short-range access or a community mesh network with broader objectives. “ 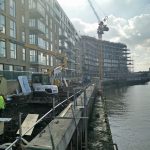 Our area of focus coincides with existing OWN access point locations, where social housing, marine, artisan, hedonist, business communities and incoming population must co-exist. The whole area is being “developed” with rising blocks on every quarter provoking questions about public space and mixed emotions !

SPC has capacity in it’s high speed network to accommodate Mazi, it’s mesh solutions are great for mobile network nodes and offer resilience in an unstable environment. Primed with a set of great locations and willing collaborators aplenty, a point to point model will ensure backbone stability and higher speeds for community connections. 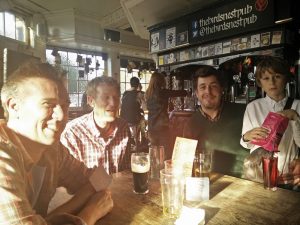 There is a swell of cultural and creative interest along Creekside in Deptford where OWN has enjoyed success to date. We hope to rekindle enthusiasm and engagement during the Mazi workshop program, promoting locally owned and run infrastructure alternatives to commercial web hegemony. 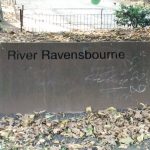 The Ravensbourne snakes from Bromley through Lewisham and opens out after Elverson Road DLR into naturalised riverside alongside Brookmill Park. It retreats again into a concrete slot under the A2 at Deptford Bridge DLR and emerges as Deptford Creek

up behind LeSoCo (Lewisham College) canyoned by new flats and hotels on the Greenwich side, developments that are set to run the length of Norman Road.

Just as the Creek broadens a little and gets really muddy there is a branch mooring a dozen barges and smaller boats. 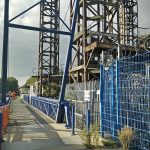 On land there are a similar array of trailers and vans where people live and work. At the top of Creekside on the corner of Deptford Church Street is the Birdsnest live music pub and local flux point. 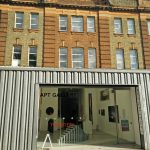 Other adjacent properties are in progress of reactivation in the sweep of enthusiasm for SE8. APT (artists in perpetuity trust) purchased the old factory building in 1995 and their community of traditional crafts practitioners are at the core of Deptford artist reputation. 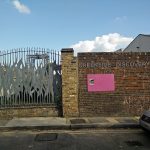 Creekside Education Centre has the only direct access to the creek. Boundless broadband coop was first implanted here in 2004, and is still operating an OWN node today. Over the road is the Crossfields council housing estate, repopulated by young families, artists and musicians in 1970’s. 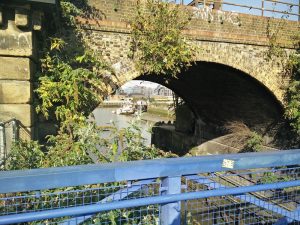 A 2nd world war Minesweeper is moored alongside one of few remaining light industrial estates off Norman Road. It has a mixed crew of arty anarchos who screen print t-shirts and lead on refurbishment of the aged hull, host great parties and a flotilla of smaller boats. 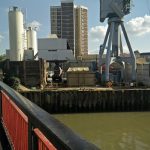 Madcap Coalition have just moved to one of the remaining warehouses adjacent to the cement works by the Creek Road lifting bridge. Finally at the mouth a new pedestrian swing bridge links between swanky new condo’s before the creek tips into the Thames.

More, much more info about the area and it’s many great features, ideas and activities are reported in a clutch of local blogs, projects and innovations to numerous to detail here.

Here is the MAZI project outline;
Do-It-Yourself networking refers to a conceptual approach to the use of low-cost hardware and wireless technologies in deploying local communication networks that can operate independently from the public Internet, owned and controlled by local actors.

MAZI means “together” in Greek and the MAZI project invests in this paradigm of technology-supported networking, as a means to bring closer together those living in physical proximity. Through an experienced interdisciplinary consortium, MAZI delivers a DIY networking toolkit that offers tools and guidelines for the easy deployment and customization of local networks and services.

The MAZI toolkit is designed to take advantage of particular characteristics of DIY networking: the de facto physical proximity between those connected; the increased privacy and autonomy; and the inclusive access. Such characteristics are used to promote information exchanges that can develop the location-based collective awareness, as a basis for fostering social cohesion, conviviality, knowledge sharing, and sustainable living. 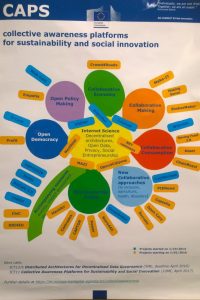 To achieve this objective, MAZI brings together partners from different disciplines: computer networks, urban planning and interdisciplinary studies, human-computer interaction, community informatics, and design research. These academic partners will collaborate closely with four community partners to ensure that the MAZI toolkit benefits from the grounded experience of citizen engagement.

MAZI draws from the diverse mix of competencies of its consortium to develop a transdisciplinary research framework, which will guide a series of long-term pilot studies in a range of environments, and enhanced by various cross-fertilization events. The main goal of this process, and its measure of success, is establishing DIY networking as a mainstream technology for enabling the development of collective awareness between those in physical proximity, and the development of surrounding research and theorizing of this approach.

This entry was posted in Mazi, Report and tagged brookmill. Bookmark the permalink.