Alexei is a free researcher working out of Raylab in Haggerston. A well known and respected I/O specialist with a passion for high voltage and radio frequency experimentation. Currently researching electro stimulation of neural feedback and blockchain resourcing.

He has exhibited a selection of these HT experiments including the ‘Hairpin Circuit’ at Moscow University. A set of spectacular arctic ICE core holographic images were recently exhibited in St Petersburg.

He lead technical development for feature film DAU – life and times of physicist Lev Landau, on set in the Ukrainian border city Kharkov where he revisited many period experiments and engineered his own to feature in the film. 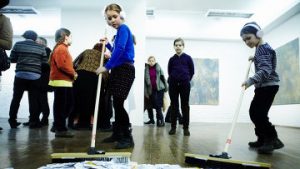 He has deep ties with the Open Wireless Network community between Moscow, London and Berlin, collaborating with Jamie Reid, Empress Stah, Shu Lea Chang and many others.