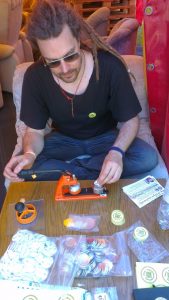 Adnan has been a regular at deckspace for over a decade, where he developed his Goldsmiths PHD based on his work with Deptford.TV.  Its a collaborative video editing service hosted in our racks, based on free and open source software, compiled into a unique suite of blog, cvs, film database and compositing tools.

He runs regular workshops either here at Deckspace, Goldsmiths and at Coventry University but most recently in Malta.. Deptford.tv is less TV more film production but has tracked the evolution of media toolkits and editing systems such as those included on the excellent PureDyne linux project.

His documentary film work tracks artist pranksters The Yes Men and net provocatours Bitnik Collective. In 2012 released Bitter Lemons documentary mapping lemon grovers on both sides of the no mans land of Cyprus.